Since 1998 the University Hospital of Mont Godinne-UCL and Erasme-ULB have served as “non official” National Reference Center (NRC) for the analysis of Gram negative bacteria.Over the last 10 years, both laboratories have significantly increased their collaboration and synergy and have been intensively involved in epidemiological surveys of antimicrobial resistance in Gram negative isolates in Belgium.In 2010, the two laboratories were officially recognized as NRC for ESBL and carbapenemases in Enterobacteriaceae and for multi-drug resistant Pseudomonas and Acinetobacter sp. Currently, the NRC works in collaboration with University hospital Erasme-ULB wich serves as associated NRC.

Missions of the NRC

Detection and characterization of emerging mechanisms of resistance in Enterobacteriaceae, Pseudomonas and Acinetobacter spp.

Evaluation of new methods to improve the detection of resistance mechanisms in Gram negative isolates.

Elaboration and formulation of national guidelines and recommendations for the control of transmission of multidrug resistant Gram negative organisms in health care facilities.

Diffusion of data collected by NRC.

Multidrug resistant, carbapenemase-producing Gram negative bacteria (Enterobacteriaceae as well as Pseudomonas and Acinetobacter sp.) were first reported in the early nineties and have been since documented worldwide. In Belgium, the first cases of infection or colonization with CPE were mainly associated with imported cases from endemic regions. Since 2011, there has been a dramatic increase in the number of CPE strains referred to our national reference center and large-scale nosocomial outbreaks have been reported in many hospitals over the last four years (2011-2014 period). Currently (January 2015), the majority of CPE strains detected are no longer related to travel abroad suggesting their rapid autochthonous spread in Belgium. Since January 2012, an active epidemiological and microbiological surveillance programme has been launched jointly by the national reference center in collaboration with the Scientific Institute of Public Health (ISP-WIV). 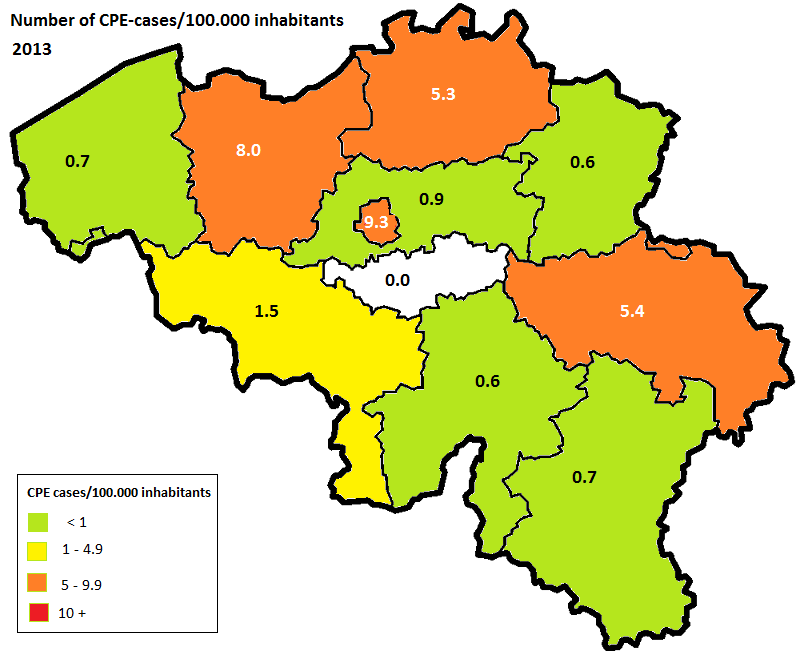 These organisms represent a major public threat worldwide in all human healthcare settings (acute and chronic care sectors), nowadays also including the community. Carbapenemase production in bacterial pathogens jeopardizes the successful treatment of severe infections, often implicating multidrug resistant strains such as extended-spectrum beta-lactamase producing Enterobacteriaceae (ESBLE). Since carbapenemase resistance determinants are located on mobile genetic elements (plasmids, transposons) often in association with resistance to several other classes of antimicrobials, very few drugs (colistin, tigecycline) remain active against these isolates and this may lead to therapeutic dead-ends for the treatment of systemic infections. The occurrence of severe systemic infections (i.e.: bacteremia) caused by carbapenemase-producing organisms has been associated on the average with a three- to four-fold increase of mortality rate in hospitalized patients in comparison to the rate associated with susceptible isolates belonging to the same species and with a delay of appropriate antibiotic therapy leading to major complications and an increase in length of stay of several days. Carbapenemase encoding genes can be easily transferable through plasmids from one bacteria to another and thus explains the rapid diffusion of these resistance mechanisms amongst the intestinal microbiota. Therefore, early identification of patients colonized or infected with carbapenemase-(or ESBL) producing organisms is crucial for the appropriate antimicrobial treatment and for the containment of their dissemination in healthcare settings and in the community.

Detection of carbapenemases in the microbiology laboratory is complex because the level of expression can be variable and it mostly relies on phenotypic methods. However, characterization of the precise type of carbapenemase involved currently mostly requires the use of molecular tests which are not available in most diagnostic laboratories. One of the missions of the NRC was to help clinical laboratories for the detection and the characterization of carbapenemases-producing organisms and also to evaluate the analytical performance of new diagnostic tests.

Background for Acinetobacter and Pseudomonas spp in Belgium

Acinetobacter and Pseudomonas spp are common pathogens in hospitals and particularly in intensive care units (ICU). These organisms have been responsible for numerous hospital outbreaks due to their ability to upregulate and/or acquire resistance determinants and thanks their capacity to survive for prolonged periods throughout the hospital environment. In contrast to Enterobacteriaceae, these organisms may survive for several weeks up to months in diverse environmental conditions. Especially for A. baumannii several studies have demonstrated the presence of these strains in various environmental locations (on inanimate surfaces, soil or surface water, …). Difficulties in the identification in Acinetobacter species by conventional biochemistry methods are commonly described (leading to misidentifications in particular for A. calcoaceticus –A. baumannii complex). Molecular methods are needed to correctly identify to the species level, considering the difference in susceptibility profiles of the strains ( A. baumannii is usually more resistant than others species from this genus) and because A. baumannii is recognized as the most clinically relevant species, largely implicated  in severe nosocomial infections and associated with a high mortality rates. Moreover, resistant A. baumannii were reported, are frequently involved in outbreaks in the ICU as well and have become a major nosocomial pathogen in the recent years. Resistance to carbapenems in Acinetobacter spp. can result from different mechanisms:  the “non-enzymatic mechanisms” such as permeability defects or overexpression of efflux pumps, but also through “enzymatic mechanisms “ including ESBL (VEB, PER, …) or carbapenemase productions (mainly OXA-23, OXA-24 and OXA-58 oxacillinases). The majority of carbapenemase genes identified in Acinetobacter baumannii are located on mobile genetic elements facilitating their spread in other clinical relevant species, suggesting their rapid dissemination and the potential reservoir. The rapid detection and identification of carbapenemase-resistant A. baumannii is essential to limit the dissemination of carbapenemase genes within the Acinetobacter genus but also to Enterobacteriaceae. Although more phenotypic techniques have been proposed, the identification of carbapenemase in Acinetobacter spp. remains difficult (lack of sensitivity or specificity) and requires molecular confirmation.

P. aeruginosa carries intrinsic resistance mechanisms to β-lactams (e.g. production of chromosomal cephalosporinase) and additional resistance mechanisms such as overexpression of efflux pumps, decreased porin expression, acquisition of ESBL and/or Ambler class B carbapenemase genes (VIM, IMP,…) can be easily acquired leading to the emergence of multidrug-resistant P. aeruginosa. In the last decade, the emergence and diffusion of several multi-drug resistant P. aeruginosa clones have become a serious issue in many countries. The dissemination of carbapenem-resistant and carbapenemase-producing strains emphasizes the need to develop rapid and accurate detection methods for the choice of optimal treatments and for the implementation of infection control measures.

The aim of National Reference Center is to help the diagnostic laboratories in the identification and characterization of the precise type of transferable resistance mechanisms (i.e: ESBL and/or carbapenemase expressed among Pseudomonas and Acinetobacter spp through the use of phenotypic and molecular tests.

A website by Uchrony
© Copyright 2015 by Evolve. All Rights Reserved.